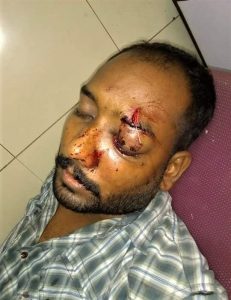 Vikram John, 25, lost sight in his left eye after Muslim neighbors who had pressured his family to leave the neighborhood with months of harassment beat him and other family members on the night of Aug. 18, his father Alvin John told Morning Star News by phone.

“After exchanging a few hot words with the Muslim youths led by a political activist named Ihsan, Vikram came inside the house,” Alvin John said. “Moments later, bricks and stones came smashing through our window glass and hitting our gate. The attackers threatened us, saying to move out of the neighborhood if we wanted to stay alive as they hurled curses and abuses on us.”

Earlier in the evening, Vikram John was involved in a minor altercation with Muslim neighbors who had teased his 18-year-old sister, said his father, who 10 months ago moved the family to Karachi’s Mehmoodabad No-II neighborhood from Sahiwal District in Punjab Province.

“This wasn’t the first time they had harassed her,” he said. “For months we had been requesting the boys’ families to stop the hooliganism, but it seems that they had found this to be an effective tool to intimidate us, so the harassment continued unabated.”

The Muslims have been harassing and intimidating the family, who belong to an Assemblies of God church, since they moved into the rented house, he said – teasing his children when they stepped out the doorway and mocking them for being Christian.