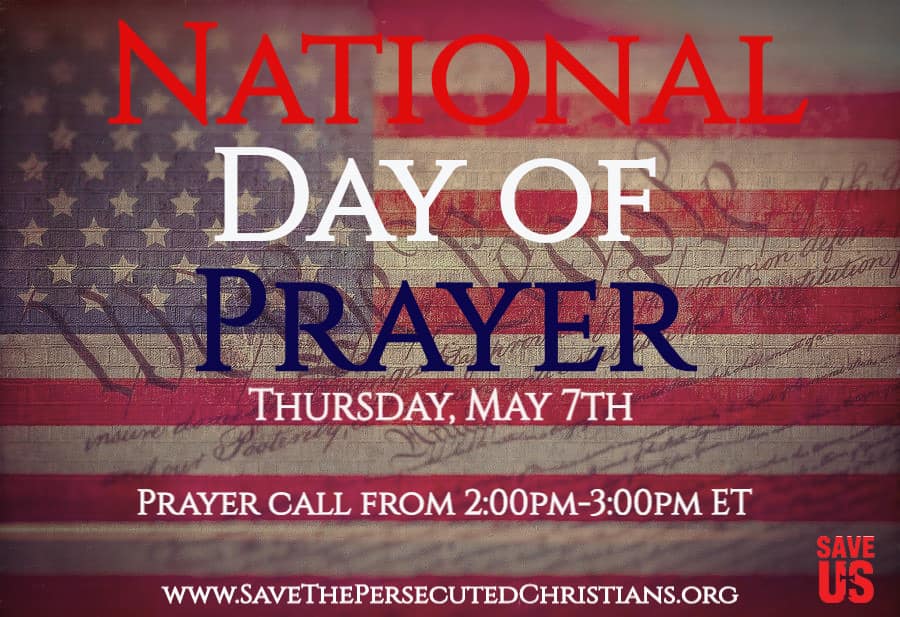 Save the Persecuted Christians (STPC), which advocates on behalf of hundreds of millions of Christians facing heavy persecution worldwide, is hosting a one-hour virtual prayer event for the U.S. National Day of Prayer at 2 p.m. EDT, Thursday, May 7. Leader will be praying intently for the United States of America, that we might cling to our founding principles and continue to lead the world in the promotion and defense of religious liberty at home and abroad.

WHO:      Save the Persecuted Christians

WHAT:    Special one-hour prayer session for the U.S. National Day of Prayer

PRAYER LEADERS: Dr. Oluwasayo Ajiboye with Mission Africa International; Bob Fu with China Aid; Pastor Greg Young with Chosen Generation Radio; Peggy Dau with Iran Alive Ministries; Pastor Greg Tweddell of Ignition 633; Alice Butler Short with Virginia Women for Trump; Faith McDonnell with the Institute on Religion and Democracy; Dominic Sputo with Lumen Life; Lydia Blaha with Save the Persecuted Christians; and Ann Schockett with the National Federation of Republican Women. (Fu and Schockett are also members of the Save the Persecuted Christians Board of Directors.)

WHERE:  Online via Zoom conference

WHY:       To pray for the United States of America and the preservation and protection of religious liberty at home and abroad

HOW:      Learn more and access event logistics at: savethepersecutedchristians.org

According to the U.S. National Day of Prayer website: “God is sovereign, and nothing comes as a surprise to Him. Whether we face fluctuating economics, threats from abroad, unrest at home or other troubling circumstances, our Heavenly Father is not caught unaware. Through prayer, we are able to tap into His wisdom, strength, protection, and peace. He stands ready to respond to our needs when we humbly ask for divine intervention in the affairs of men.”

The theme for the 2020 observation is “Pray God’s Glory Across the Earth—Habakkuk 2:14.” National Day of Prayer leaders also urge all to “pray into seven centers of influence in our nation:” government, military, media, business, education, church and family. A national broadcast is set for 8 to 10 p.m. EDT, Thursday, May 7, on GOD TV, Daystar Television, Moody Broadcasting, Facebook Live and more.