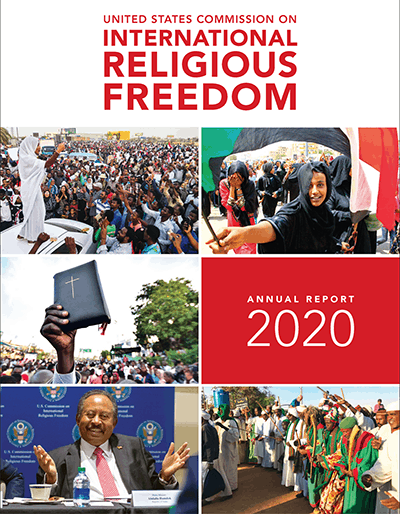 WASHINGTON— The United States Commission on International Religious Freedom (USCIRF) released its 2020 Annual Report today and, in the process, is making several “recommendations to enhance the U.S. government’s promotion of freedom of religion or belief abroad in 2020.”

Save the Persecuted Christians (STPC), which advocates on behalf of hundreds of millions of Christians facing heavy persecution worldwide, pointed to USCIRF evidence that both progress and backsliding in religious freedom conditions were witnessed in 2019.

“Our coalition welcomes the release of the 2020 USCIRF annual report and appreciates the ongoing effort of the commissioners and their staff to serve as a watchdog for religious freedom issues internationally,” said Dede Laugesen, executive director for Save the Persecuted Christians. “The work of USCIRF is invaluable to America’s commitment to the defense and promotion of freedom of religion and belief worldwide. We are especially thankful for their concern for people of faith in Nigeria, Iran, Syria, China, North Korea, India and Pakistan, where persecution of Christians is most acute.”

In the 2020 report, USCIRF recommends 14 countries to the State Department for designation as “countries of particular concern” (CPCs) because their governments engage in or tolerate “systematic, ongoing, egregious violations.” These include nine that the State Department designated as CPCs in December 2019—Burma, China, Eritrea, Iran, North Korea, Pakistan, Saudi Arabia, Tajikistan and Turkmenistan—as well as five others—India, Nigeria, Russia, Syria and Vietnam.

Instead of using its own “Tier 2” category, as in past reports, the 2020 Annual Report also recommends 15 countries for placement on the State Department’s Special Watch List (SWL) for severe violations. These include four that the State Department placed on that list in December 2019—Cuba, Nicaragua, Sudan and Uzbekistan—as well as 11 others—Afghanistan, Algeria, Azerbaijan, Bahrain, Central African Republic (CAR), Egypt, Indonesia, Iraq, Kazakhstan, Malaysia and Turkey. USCIRF had recommended Sudan, Uzbekistan and CAR for CPC designation in its 2019 Annual Report; the SWL recommendations this year are based on improved conditions in those countries.

“We are encouraged by the positive steps some governments took in 2019—particularly two that engaged closely with USCIRF—to establish a safer environment for freedom of religion or belief,” USCIRF Chair Tony Perkins said in a statement. “Sudan stands out, demonstrating that new leadership with the will to change can quickly bring tangible improvements. Uzbekistan also made important progress in 2019 toward fulfilling the commitments it made to allow religious groups greater freedom. Though other countries deteriorated, particularly India, we see international religious freedom on an upward trajectory overall.”

Save the Persecuted Christians reports often on news of ongoing violence against Christians at ChristianPersecutionNews.com. This dedicated news aggregator captures current instances of persecution and provides readers with an easy way to share these heartbreaking stories with others. Stories are categorized and resource reports are easily accessible.

USA – U.S. to Ramp Up Counterterrorism Efforts in Sahel Region