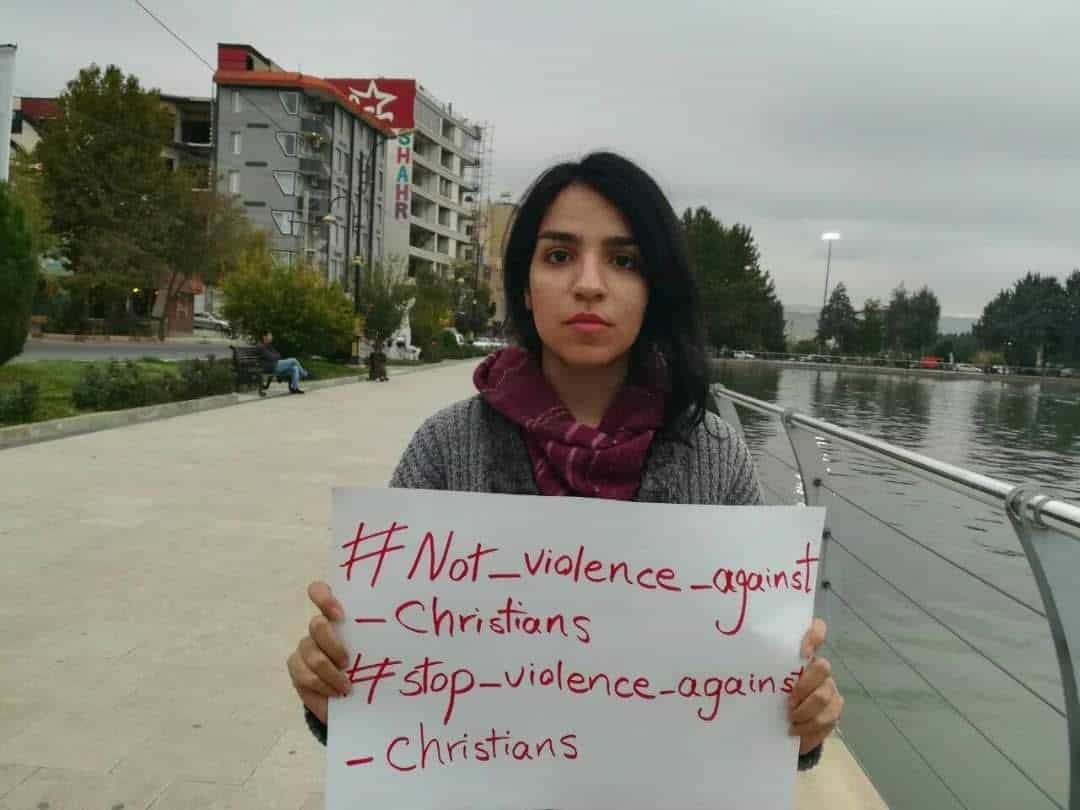 WASHINGTON—Iranian Christian Mary Mohammadi, a young woman arrested multiple times and persecuted for her faith in Jesus, had her day in court on Tuesday, April 14.

One of Mary’s longtime friends, Randy Noble, a human rights activist for Iran and host of a weekly blog talk radio program, “The Cross in the Desert: Speaking Hope and Freedom to Iran,” provided a report this afternoon to leaders and coalition partners of Save the Persecuted Christians (STPC), which advocates on behalf of hundreds of millions of Christians facing heavy persecution worldwide.

“Mary was arrested during massive protests following the downing of the Ukrainian passenger plane that killed all 176 on board in January of this year,” said Dede Laugesen, executive director of Save the Persecuted Christians. “She was one of thousands on the street, yet she was arrested and brutally beaten. The questions asked by the judge show she is facing a prison sentence not for protesting, but for her faith.”

Article 18, a non-profit organization in London that is dedicated to the protection and promotion of religious freedom in Iran, shared on Facebook that Tuesday in court, Mary, who had been charged with “disturbing public order by participating in an illegal gathering,” was questioned about religion and the reasons for her conversion to Christianity. During the hearing, Noble added, the judge also questioned Mary about her real name—Fatemeh, an Islamic name—and if her name change was due to her Christian conversion. She was reportedly asked questions such as: Have you converted your religion and do not accept Islam? Do you know that Christianity has many gaps? Is your family aware of your conversion?

“At the end of the hearing, court announced it will issue a verdict soon,” Noble said. “Mary is a wonderful, outspoken, very active and courageous girl. She came from a home church setting and fearlessly decided she had to be a voice for religious freedom, committing to showing people on social media how real worship services are operated. Mary has continued to support Iranian Christians. She is not afraid, and I am so inspired by her life. I am thankful to God for her bright light of Jesus in her life. Mary really needs our prayers right now as she awaits this court decision. She could very well be sent back to prison for converting from Islam to Christianity.”

This most recent incident is not the first run-in with the Iranian regime for the 21-year-old woman. Since converting from Islam to Christianity at 18, she’s been harassed, arrested and beaten more than once. Also according to Article 18, Mary’s original hearing on March 2 had been postponed due to the coronavirus. After her hearing was rescheduled for April 14, Mary tweeted it would be a “crime against humanity” to send anyone to prison under the current circumstances.

The group also reported, “Mary has previously spent six months in prison for her membership of a Tehran house-church, and in December she was kicked out of university without explanation. The judge cited no evidence against her, saying that her presence in the area where the rally was taking place was evidence in itself.”

Learn more at the Pray For Mary Mohammadi public group on Facebook or read about her on Open Doors USA.

With so much of the world’s Christian population being imprisoned and/or harassed for their beliefs, such as believers in Iran like Mary, the need has never been greater for the sort of grassroots campaign STPC’s SaveUs Movement is working to foster. Its efforts are modeled after a miraculously successful one that helped free another population suffering from heavy persecution—Soviet Jews—by penalizing those in the Kremlin responsible for such repression. Through this movement, Save the Persecuted Christians endeavors to provide American policymakers with the popular support they need to effect real change worldwide and alleviate systemically the suffering being experienced by so many of those following Christ.

IRAQ – 200 Mass Graves Containing the Remains of 12,000 ISIS Victims are Discovered in Iraq