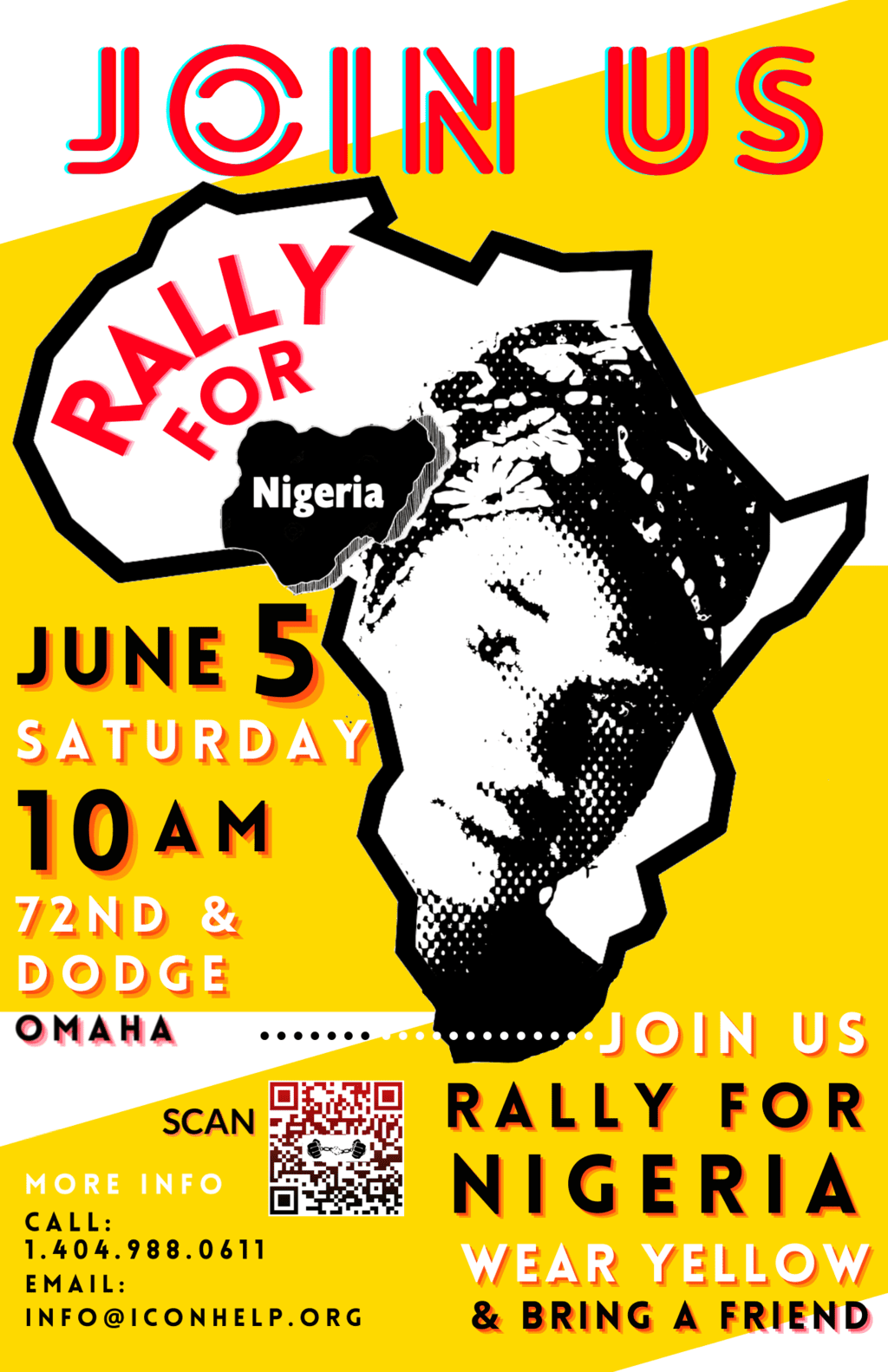 The CFNS is a coalition of Nigerian and Nigerian American human rights activists and their respective groups, including the International Committee on Nigeria, the Leah Foundation, Mission Africa International, Save the Persecuted Christians and many others.

The purpose of the rally is to gain the attention of Nebraska Senator Ben Sasse, who is a member of the U.S. Senate’s Select Committee on Intelligence and has spoken out against religious persecution in the past. He is in a position to take our information and use it to force the U.S. to put pressure on the Nigerian government to forcibly free the slaves. And, to also invite the support of Nebraska Representative Jeff Fortenberry, who has previously advocated for Sudanese victims of enslavement.

Since 2001, Boko Haram terrorists, Fulani militants, and other extremist groups tied to the Islamic State and al-Qaeda, have raided Nigerian villages, killed tens of thousands, and enslaved an untold number of women and children.

CFSN member Stephen Enada, president of the International Committee on Nigeria (ICON), said today, “In Nigeria, jihad terrorists are storming our villages and murdering our people. So far this year over 1,500 Nigerians, who are mostly Christians, have been murdered by these jihadists and over 2,000 people have been abducted or kidnapped. The situation is dire. We can no longer sit in silence as our brothers and sisters in Nigeria are being captured and enslaved.”

According to the CFNS, in 2021 alone, hundreds of schoolchildren in Nigeria have been kidnapped. Parents fear sending their children to school. School-aged children are terrorized. Most of the individuals captured by Boko Haram jihadists are young women and girls taken by force and trafficked as slave concubines. They endure horrendous abuse and mistreatment. An example of one of these victims is displayed on the CFNS-sponsored billboard: she is 18-year-old Leah Sharibu, kidnapped from her school in Dapchi, Nigeria, in 2018.

“Nigerian women and girls like Leah Sharibu who are enslaved by Boko Haram terrorists should never be abandoned or forgotten in captivity,” said CFNS member Dr. Gloria Puldu, president of the LEAH Foundation, an organization which represents the Sharibu family and lobbies for Leah’s release. Christian girls like Leah are pressed by the terrorists to convert to a faith not her own.”

“I’m confident that if we bring these facts to more people, more people will get angry and start making a difference,” said Samuel Akough, a local Nigerian American activist from Omaha.

Nigeria is ranked third in the 2020 Global Terrorism Index (GTI) of countries most impacted by terrorism. Since 2014, Fulani militants — a small, extremist portion of the Fulani people — have accelerated the conflict with Nigerian Christians at an alarming rate. Fulani militants are reportedly responsible for 7,400 deaths since 2015, targeting and attacking whole communities, schools, and households. Boko Haram has formally pledged allegiance to the Islamic State, and, since 2009, it is believed responsible for murdering approximately 30,000 innocent people and displacing at least two million.

All Americans — across the political spectrum — should join in this effort to emancipate today’s slaves.

The website, www.FreeNigerianSlaves.org, has been created in order to educate the public.

With so much of the world’s Christian population being imprisoned and/or harassed for their beliefs, such as Christians in Nigeria, the need has never been greater for the sort of grassroots campaign STPC’s SaveUs Movement is working to foster. Its efforts are modeled after a miraculously successful one that helped free another population suffering from heavy persecution—Soviet Jews—by penalizing those in the Kremlin responsible for such repression. Through this movement, Save the Persecuted Christians endeavors to provide American policymakers with the popular support they need to effect real change worldwide and alleviate systemicallythe suffering being experienced by so many of those following Christ.

NIGERIA – Leah 6 Months After Being Kidnapped

RELEASE – Save the Persecuted Christians Calls for the Appointment of a U.S. Presidential Special Envoy to Nigeria and the Lake Chad Region