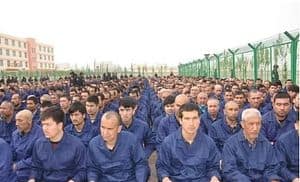 For Immediate Release | Save the Persecuted Christians | November 4, 2020

WASHINGTON—Save the Persecuted Christians (STPC), a leading international human rights advocacy group which works on behalf of hundreds of millions of persecuted Christians worldwide, applauds the bipartisan resolution introduced by Sen. John Cornyn (R-TX) and Sen. Robert Menendez (D-NJ), which seeks to designate human rights abuses perpetrated by the People’s Republic of China against the Uyghur people and other ethnic minorities in the Xinjiang Uyghur Autonomous Region (XUAR) as genocide.

The resolution would hold China accountable under the 1948 United Nations Convention on the Prevention and Punishment of the Crime of Genocide and begin the process to coordinate an international response to bring these abuses to a halt.

“Save the Persecuted Christians is very encouraged by this joint resolution,” says Dede Laugesen, executive director of Save the Persecuted Christians. “It’s good to see our lawmakers join together to expose the injustices being done to the Uyghurs and other ethnic and religious minorities being victimized in formerly independent nation of East Turkistan, now known in China as Xinjiang Province.

“Christian Uyghurs, a small minority, are persecuted and enslaved along with the majority population of Muslim Uyghurs, Kazakhs and other non-Han people. We cannot abandon them to the unspeakable horrors they face. Calling out the Chinese Communist Party’s crime of genocide is a moral imperative for all people of good will.”

According to the announcement about the resolution on Sen. John Cornyn’s page,

“Since 2017, the Chinese Communist Party has detained an estimated 1.8 million Turkic Muslims, mostly Uyghurs, in internment camps without due process. Detained Uyghurs are tortured, coerced to disavow their religious beliefs and cultural practices, compelled to work in forced labor programs, and, in some cases, raped, subjected to involuntary sterilization, and forced organ harvesting. As a direct result of the CCP’s targeted population control campaign against Uyghurs, the birthrate of the Uyghur population in the XUAR plummeted by 24% from 2017 to 2018, with birthrates in the Uyghur majority regions of Hotan and Kashgar decreasing by more than 60% from 2015 to 2018. In 2018, 80 percent of all net added IUD placements in China (calculated as placements minus removals) were performed in Xinjiang, despite the fact that the region only makes up 1.8 percent of the nation’s population. Nearly half a million Muslim children in Xinjiang have been forcibly removed from their families, placed in state-run boarding schools and subjected to indoctrination and inhumane treatment. Between 2017 and 2019, an estimated 80,000 Uyghurs were forcibly transferred out of the XUAR to work in factories across China which has raised concerns of forced labor being used in global supply chains.”

Sen. Cornyn: “For far too long, the Chinese government has carried out a despicable campaign of genocide against millions of Uyghurs and other Turkic Muslims. This resolution recognizes these crimes for what they are and is the first step toward holding China accountable for their monstrous actions.”

Sen. Menendez: “There can be no question that the People’s Republic of China is committing genocide against the Uyghurs in Xinjiang. Stopping a genocide is consistent with our national security and our values, and it starts by standing up and speaking the truth. I hope that President Trump and Secretary Pompeo will join us in calling this genocide by its name and responding to it with our partners in the international community.”

Laugesen said, “Back in July, a broad coalition of over 600 human rights advocates and organizations led by Save the Persecuted Christians and our coalition partner, the Committee on the Present Danger: China, penned an open letter to Attorney General William Barr. We’re asking him to officially condemn the Chinese Communist Party as a Transnational Criminal Organization responsible for releasing a pandemic on the world, wide-scale espionage, theft of U.S. intellectual property, intentionally flooding America with deadly and addictive fentanyl, global environmental destruction, and mass violations of human rights including genocide.

“Last month, Congressman Scott Perry introduced a bill to do just that. More and more, America and her leaders are waking up to the threat that China poses to the United States, and even to its own neighbors and citizens.”

“The CCP is an abject moral failure,” Perry said, as he introduced the bill. “You know this. It is decrepit, it is demonic, it is an institution that subjugates and enslaves the people it has dominion over. In the past hundred years, our world saw the rise of communism in the Soviet Union and we witnessed freedom imperiled by evil. And we’re witnessing it right now today. Right as we stand here, it is happening right now today. But it cannot be allowed to endure.”

With so much of the world’s Christian population being imprisoned and/or harassed for their beliefs, such as Christians in China, the need has never been greater for the sort of grassroots campaign STPC’s SaveUs Movement is working to foster. Its efforts are modeled after a miraculously successful one that helped free another population suffering from heavy persecution—Soviet Jews—by penalizing those in the Kremlin responsible for such repression. Through this movement, Save the Persecuted Christians endeavors to provide American policymakers with the popular support they need to effect real change worldwide and alleviate systemically the suffering being experienced by so many of those following Christ.

ISIS has infiltrated the West — here’s how we know